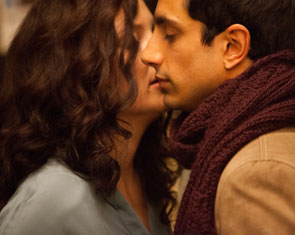 Student demonstrations are raging in Lahore, as young Pakistani professor Changez Khan and a journalist, Bobby Lincoln, share a cup of tea and conversation.

Princetoneducated Changez tells Lincoln of his past as a brilliant business analyst on Wall Street. He talks of the glittering future that lay before him and the beautiful and sophisticated Erica whom he was set to share that future with.

But then 9/11 changes everything. Attitudes shift dramatically—his very name and face rendering him suspect. Returning to his homeland and the family to whom he is very close, he takes up a post as lecturer at the local university, a hotbed of radicalism and the new militant academia. The collegial pretense of the meeting in a Lahore teahouse, between Lincoln and Changez, slowly gives way to why the unlikely pair has gathered on a summer day—another professor has been kidnapped by extremists, and the clock is ticking toward a deadline for his execution. Changez’s family is being harassed and is in real danger. Bobby is there to listen, with an agenda of his own. Taking us through the culturally rich and beguiling worlds of New York, Lahore and Istanbul The Reluctant Fundamentalist is an exploration of prejudice and the phenomenon of globalization that is both exhilerating and deeply unsettling.

The making of The Reluctant Fundamentalist is a modern story of bridge-making; an Indian making a Pakistani film about America. I was immediately drawn to Mohsin Hamid’s brilliant novel, a sleek, contemporary thriller that challenges all the rhetoric surrounding Muslim identity. My father lived in Lahore before the partition of India and Pakistan. As a child in modern India in the 1950s, I was steeped in what is considered Pakistani culture: the music, the poetry, the style. I have since found a home in three continents, continuing the seesaw between India, America and Africa. The Reluctant Fundamentalist gave me the platform to create a dialog between the subcontinent and the west, over a schism that becomes more and more pronounced each day. The Reluctant Fundamentalist is my first “human thriller,” a story about conflicting ideologies, instead of competing fists, where perception and suspicion have the power to determine life or death.