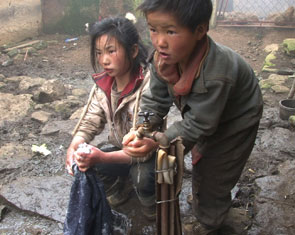 Three sisters live alone in a small village family house in the high mountains of the Yunnan region.

Their parents are nowhere to be seen. The three little girls spend their days working in the fields or wondering in the village. As their aunt finds difficult to provide food to the girls, the father returns to the village. He has come to take the girls with him to the city but he then agrees to leave the older alone under the supervision of her grandfather.

San zi mei follows an ordinary poor peasant’s family of four (a father and his three daughters) and their daily lives. We follow the relation between the family members, how in such misery men are capable of adapting themselves in order to survive, how even in the middle of nothing children manage to grow up, how the daily minute things are mountains for those people. When I fi rst met the family about four years ago, I was touched by the incredibly diffi cult situation in which those kids were growing up. This is why I wanted to testify about the reality of these poor peasants’ life in contemporary China.

Courthouse on the Horseback