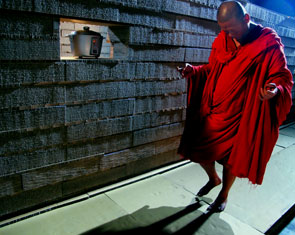 Xiao Kang in a monk’s red robe – / my third slow walking film. / He walks past an electric rice cooker, / as slowly as ever. /

We see rice being cooked in the cooker, / steaming. / We can almost hear the water turning into steam as it boils. / The lid rattles, / as if about to blow up. / Imagine the rice being cooked gradually, / trembling, expanding, softening. / You can almost smell its fragrance. / Although we eat rice everyday, / we never observe a rice cooker intently. / Because such deep observation / reminds me of the Lord Buddha’s words: / All conditioned phenomena / are like a dream, an illusion, a bubble, a shadow, / like dew or a fl ash of lightning; / Thus we shall perceive them.

This concept originated from a monologue play I staged not long ago for the Chinese Taipei National Theater. During one scene in the play, Xiao Kang walks extremely slowly for 30 minutes. It moved me tremendously. For 30 minutes, there was no plot, no sound, no dialog, no action and no thoughts. Walking didn’t seem like walking anymore, and all that remained in the theater was time slowly passing and a sense of our own existence that we didn’t feel before.

I Don’t Want to Sleep Alone