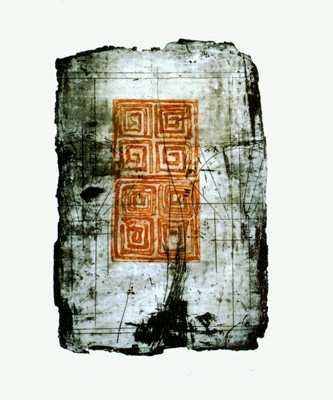 Purity is the word that springs to mind when one looks, really looks, at a Tan Ping etching. Pure in the sense that they are unsullied, untainted with spurious messages and concerns from our direct representational world.

They are surely ‘art for art’s sake.’

These abstractions rely on the essence of relationships between the forms, the linear elements, the colors and space relationships set up by the over-all impact of the composition. Yet these abstract relationships can, and do, suggest the entire gamut of emotional experiences much the same as with human relationships – forms might be suggestive of either dominance or submission, balance and security, or maybe vulnerability and fragility. The combined effect of the forms and relationships may threaten danger or collapse or in some instances humor and playfulness. The possible ‘readings’ of these works is endless and depends entirely upon the life experience and involvement that the viewer brings to them. Tan Ping’s works have always seemed to me to be about humanity and human endeavor, even though communicated through these most abstracted forms.
Indeed a study of the etchings of Tan Ping over the past decade is a most rewarding undertaking. Works from the early nineties record free-wheeling and direct mark-making adventures onto the etching plate. Simultaneously, and through to the mid-nineties, Tan Ping concentrated on an intriguing series using various fragmented references to history and time. From 1996 – 1998 the artist’s preoccupations shifted to a phase of confident arrangements of blocky prints from his textured and deeply etched plates. These compositions involved the careful positioning of the blocks in vast regions of space. They reveled in new and exciting color combinations with a predisposition towards dark rich blacks played cleverly and solidly against flashes of high key color. The prints required many passings through the press in order to build up the compositions. Form/space relationships in those works, as in these, are masterfully controlled – with the large white areas powerfully emphasizing the density and visual weight of the solid forms.

The works in this exhibition are a development from etchings created for the 1999 show. They mark an exciting development in the artist’s sensibility and even deeper sense of purity to abstractionism, as always, but also to his chosen art form – etching. With the introduction of his own handmade pulp paper Tan Ping manages to push the tactile and visual aesthetic pleasures of one of the essential elements of etching. However it is the heightened sculptural effect that is most surprising. This new paper together with the use of rich dense ink seems to imbue the forms with a convincing sense weight and the forms, shapes and particularly the thick lines seem to take on lives of their own. But the works also offer a new playful freedom of design through the introduction of linear elements that connect or move in front of forms in inter-plays that are fluid and sometimes personal, or even humorous in nature.

It could be said that the compositions nod backwards to formalist works and to the doctrines of modernism. Certainly the manner in which Tan Ping plays with forms and space is reminiscent of formalist sculpture, with the linear elements bending, turning and moving backward or forward through implied three dimensional space just as though they were metal. However the combined use of black, gray and natural color tones with bolder colors of red, orange and blue, used sparingly, together with this new linear, or calligraphic aspect also gives the work a distinctive mood that recalls traditional Chinese painting.

Maybe it takes a master of etching like Tan Ping, and in particular a Chinese master of etching, to reconfigure the essence of old formalist doctrines like “purity of form,” “art for art’s sake” into something fresh and new and entirely his own.