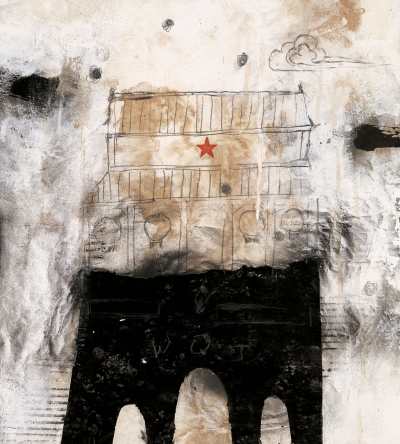 The academic contention about the problem of ink and wash which has gone on for almost a century and the unceasing innovation of ink and wash parallel with it are two of the most thought-provoking phenomena in Chinese culture in the 20th Century.

When in 1910 Jin Shaocheng founded the Researching Society of Traditional Chinese Painting which was opposed to doing anything unconventional or incorporating Western techniques, and in 1917 Kang Youwei appealed to the public in his “Preface to the Catalogue of the Collection of Wanmu Caotang” that “if we still stick to old ways and refuse to make a change, Chinese painting will surely become extinct” and maintained that “we should open a new epoch of painting by combining the Chinese techniques with the Western ones“, the prelude to the debate about traditional Chinese painting in this century started. From the 1920s to the 1940s, the contradiction and conflict between the so-called schools of “back to the ancients“, “making new creations” and “eclecticism” never ceased. During this period Xu Beihong‘s proposition of “reforming the traditional Chinese painting” and Gao Qifeng and some others’ view about the “New Chinese Painting” were put forward successively and were put into practice. In the 1950s, soon after the founding of the People’s Republic of China, the discussion about the reform and innovation of traditional Chinese painting occurred. When this discussion became in the 1960s the debate about the catharsis of Shi Lu, the key person of the “Chang’an School“, with the ink and brushwork as the media, characterized by “roughness, weirdness, disorder and blackness“, people began to think about the modern transformation of the language of ink and wash. Thus the debate about the problem of ink and wash started in the first half of the century in response to the impact of the Western culture began its substantial progress from the external to the internal, from the social political level to the cultural and psychological level. It is a pity that the “unprecedented” “great cultural revolution” broke off this discussion about the problem of the brushwork and ink-applying technique of traditional Chinese painting which was gaining in its academic level and theoretical value.

II. When we glance in retrospect over the Chinese culture in the past one hundred years at the turn of the century, we can see not only many thought-provoking points in the debate about the problem of ink and wash painting, but also unprecedented gigantic achievements due to the transformation and development of Chinese ink and wash in the 20th century. These achievements are mainly embodied in two important aspects:

1. A group of great masters of ink and wash have emerged who are closely associated with this century. The name of each great master represents a splendid artistic achievement, and these achievements constitute the history of the modern transformation of traditional Chinese ink and wash painting in the 20th century.

2. The diversified artistic pattern in the development of ink and wash has been formed. Beginning from the 1990s, the field of ink and wash consists of three types: the brushwork and ink-applying technique school which purely follows the tradition, the academic school which uses the Western realistic painting and modern language of painting for reference, and the experimental ink and wash which appropriates the Western modern and post-modern artistic experience.

It should be said that the latter aspect is more important. It has made the contemporary field of ink and wash a modern system of ink and wash with the internal impetus that unceasingly pushes it toward modern mode. In this system, the three types or orientations have by no means formed a situation of tripartite confrontation. The traditional brushwork and ink-applying technique school is declining, the academic school holds a central position and becomes the mainstream, and the experimental ink and wash has just entered the margin from a disreputable position. The boundaries between them are not very distinct and there is something of each in the other. However, their differences are obvious, and it is these differences that constitute the internal tension of the system of ink and wash and endow it with an internal impetus which pushes it toward the modern mode: the brushwork and ink-applying technique school is connected with the traditional culture and conveys the cultural resources; the academic ink and wash, incorporating things at all times and in all lands, is the most important cultural vehicle of the spirit of traditional ink and wash at present; the experimental ink and wash, though seemingly alien to the traditional ink and wash, is in essence still within the Chinese cultural tradition, and it is through its antagonism against the purely westernized artistic mode that it has won for the art of ink and wash its status and position in contemporary art and makes it possible for the spirit of the ink and wash culture to be handed down in contemporary art.

“Black and White” and the Disappearance of the Modern Character
Previous