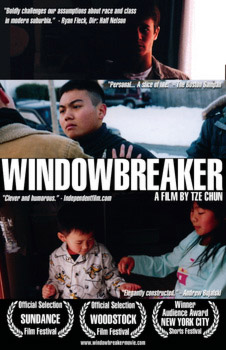 When a string of break-ins occur in a mixed-race suburb, residents are abuzz as to who is responsible.

When a string of break-ins occurs in a mixed-race suburb, residents are abuzz as to who is responsible. In eleven short minutes, this film weaves together the stories of two paranoid children, their workaholic mother, a gang of Vietnamese teens, a security store employee, and one prolific windowbreaker.

Neighborhoods have collective fears that everyone feels but nobody voices. My mom taught me this when she worked as a real estate broker in the 1980s. There’s a reason one house can sell and another can’t.
When there was a break-in on our block, my mom had an alarm system installed. It wasn’t good enough for me and my little sis. We built Rube Goldberg-type traps. We imagined gruesome ends for any intruders that would try to break into our house. We were age 9 and 6, respectively.
We never caught anyone. Mom stepped on one of our traps one day and got the sharpened tip of a pencil lodged in her foot. We stopped making traps after that.
My mom’s foot healed over, but if you look closely, you can still see the darkened end of the pencil underneath the skin.
About the shoot:
Windowbreaker was shot over two weekends in Quincy and Randolph, Massachusetts. The principals were primarily cast from non-actors from the neighborhood. The kids’ house in the film is the house the director grew up in. The mother in the film is played by Ai Cheng, the director’s mom. Tze (pronounced “Z”) graduated from Columbia University in 2002. He has since directed twelve short films and written six feature screenplays. He currently has three shorts – Windowbreaker, Back to the Front, and Document – making the festival rounds this year. His newest short, a 35mm comedy entitled Cold Feet, Wet Dreams, and the Kitchen Sink, is being submitted to high profile festivals for a 2007 run. In 2005, he teamed with an art director, a producer, and an Emmy award-winning editor to co-found the commercial production company Mass Republic. He is also a member of theatre and film production company Collective Act, which has produced multiple off-Broadway shows in New York City as well as four of his short films.
In addition to his film work, Tze works as a painter and visual artist. He is represented by CVZContemporary gallery in Soho (www.cvzcontemporary.com) and has commissioned portraits in private residences in New York City, Philadelphia, Boston, and New Orleans. Recently, he painted the original artwork used for the poster for Anna Boden and Ryan Fleck’s Half Nelson (THINKfilm).
For the past year, Tze has also been working on a book and film project about his mother. Sold at birth by her parents, Ai Cheng was bought by a neighborhood brothel for sixty dollars. When Ai was 10, she escaped and went to Hong Kong with a prostitute who would later become her adopted mother. When she was in her teens, she returned to Singapore to find her real parents. Tze, his sister, and his mother have thus far interviewed dozens of women from the brothel and compiled over four hundreds of pages of notes. Tze hopes to write a screenplay from the research early next year, with a book and possibly a documentary to follow.

Bryan Wilson (Producer/Actor) has had featured roles in such television shows as Showtime’s The Brotherhood, Nickelodeon’s Drake and Josh, as well as numerous television commercials. He worked in journalism at ABC’s affiliate channel in Boston (WCVB) before switching over to producing shorts and pursuing an acting career full time. He currently works and resides in New York City, where he recently played one of the leads in the independent feature Hot Baby.