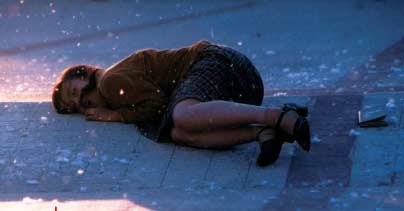 Tian An Men. Syllables of joy, syllables of terror. For six weeks, from April to early June 1989, the whole of China vibrates to the rhythm of that vast square in Beijing. An incredible wind of freedom is blowing over the city and over the empire of one billion people. A new wind, one that causes the party bosses to totter. A rising desire for liberty, a dance of happiness in which students, parents, workers, and employees stand hand in hand to turn toward the world. On a square of almost 100 acres, under makeshift tents and tarps, in a sea of red flags and parasols, words of emancipation ring out, banners with insolent slogans flap. Thousands of youthful hearts sing, and the heartfelt calls – free elections, democracy, liberty – fly to the heart of the Forbidden City. The people believe, send their standard-bearers, listen to democrats in the party, including Zhao Ziyang, as they encourage the audacious racket. The great walls shake, dogma falters, the Forbidden City trembles. A stone’s throw away, one of my friends, D., a teacher at the arts academy, is watching over the secret work of his students:

a copy of the Statue of Liberty, made from four pieces of polystyrene, soon to be erected on the square, under the portrait of Mao. Smeared with paint, the Great Helmsman can’t believe his eyes. The people of Beijing have become the spearhead of a revolution, the real revolution, the one that will
bury the last of the fortresses.
As it is for Lou Ye’s lovers, “desire has become reality.” June 3, 1989. A first column of young recruits is sent to the front on the square, without weapons. A provocation that the students do not sidestep. An opportunity for the army to round up its troops, to convince the recalcitrants to impose the flouted order. On the evening of June 4th, a first small tank is sent in. It founders on the barricades, burns under flaming
blankets. As I look on, at the entry to the Forbidden City, the three soldiers are lynched by a crowd, drunk with rage, that knows that the hour of vengeance has tolled. Then the troops flood in, from the west. The repression strikes young and old, men and women, mendicants and mandarins. Shots are fired, students fall by the hundred, workers howl, parents cry.
Betrayed urchins, the heroes of Tiananmen evacuate the scene of the events. Order reigns once again. An entire generation sees its dreams shattered on the bayonets.

The next day, in front of the windows of my room, in the Beijing Hotel, dozens of the rebels are wounded. A student with plastic bags stops a column of tanks, an ephemeral symbol of a resistance that has given up hope. Rain has come, as well as despair, and the patriots tremble from the cold. The dazibaos are torn down. On the TV screen, films by agents I took for innocent passersby, the faces of the leaders of the revolt scroll past, catalogued as counterrevolutionaries, plainly labeled “traitors to the nation.” Denunciations are the order of the day.
Fear has taken over.
A grim, heavy door closes. Silence settles in, century-long. Mentioning Tiananmen becomes an offence. Purges take hold. But in the hearts of many Chinese, the desire for freedom is secretly anchored. If they can’t change the world, they can dream of a new, more human empire. As if, beyond the empty square, beyond the crematoriums and the jails where the insurgents lie rotting, the spirit still reigned. Behind the bars, memories endure, awaiting a trial that will one day avenge the affront. The family of one victim has already been compensated, a sign of implicit recognition. The freedomdrunk
Rimbauds have not spoken their last. The Beijing Spring is not dead, it lives on in the soul.