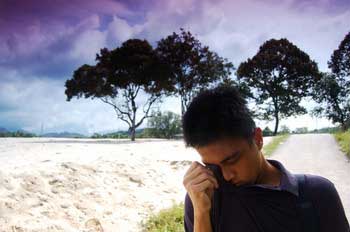 Sinossi Synopsis
When 19-year old Tung – a young Malaysian living with his aging mother in a small town – sets out to reconnect with his elder brother in the urban chaos of Kuala Lumpur, little does he realize that a journey of self-discovery into the conflicted realms of love, loyalty and loss lies directly up ahead. Guileless and overconfident, Tung soon finds himself drawn into a world where deceit, treachery, violence, and irrevocable loss are the only certainties – and where the only lesson to be to be gleaned is just how difficult adulthood can make it for any of us to ever go home again. Shot on an intoxicating variety of locations throughout Malaysia – from the neon murk of Kuala Lumpur’s all-night urban pool halls to misty fields freckled with the distant shapes of grazing water buffalo, Tai Yang Yue – Rain Dogs is a tough and tender film about people coming of age in uncertain times and places; an intimate portrait of the unspoken and sometimes nearly unfathomable bonds that hold parents and children together – and the emotional faultlines that can open unbridgeable chasms between them, and force even the closest of family relations apart.

Commento del regista Director’s notes
Tai Yang Yue – Rain Dogs began as a story I’d written some time ago about two friends, and how one of them learns to deal with the loss of the other. But somehow, it wasn’t enough – something wasn’t quite right. A year later it dawned on me that they should be brought closer together from the beginning. So, they became brothers. Slowly, my exploration of their two trajectories went deeper, and their blood tie allowed me to explore another important character in this story: their mother. Now I had a family.
I followed each one of them as dutifully as I could, concentrating on the way they lived their lives. I tried to trace their emotional arcs with all their inconsistencies and boldnesses intact. And as I did, the time and place in which the story was taking place began to come naturally. The story chronicles a young man’s search for his brother in the big city, and how one brother comes to terms with the other’s sudden and perhaps accidental death. Try as he might to hold on to his family, particularly once the only other member left is his mother, he fails, and finally runs away to a fishing village to be with his uncle, whose own experiences stand out like bruises on his heart. And in growing closer to his uncle, the young man comes to better understand the break his brother had made from the family years before.
Ultimately, Tai Yang Yue – Rain Dogs is for me a film about the music of chance – a story about love and loss and all the sadnesses of life.

Biografia Biography
Born in 1971 in Malaysia, writer/director/actor Ho Yuhang was took a degree in engineering from Iowa State University before returning to begin what might have been an ordinary career – had a last-minute decision to quit his job and begin writing/shooting his own movies instead. His second career began in the commercial television industry in order to immerse himself in the basics of film production, and later shot an award-winning documentary, Semangat Insan (1999). Ho’s first feature, Min (2002) won the Special Jury Prize at the Nantes Festival of 3 Continents. His second, Sanctuary (2004) won the NETPAC Award at the Pusan International Film Festival, and an Honorary Mention from the International Film Festival Rotterdam. Ho Yuhang is now recognized as one of the leading figures in Malaysia’s internationally celebrated contemporary independent film movement.

Courthouse on the Horseback