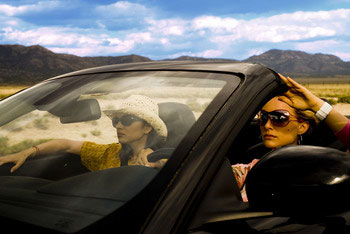 In Wong Kar Wai’s debut English language feature, the internationally acclaimed director takes his audience on a dramatic journey across the distance between heartbreak and a new beginning.

After a rough break-up, Elizabeth (played by songstress Norah Jones in her screen debut) sets out on a journey across America, leaving behind a life of memories, a dream and a soulful new friend — a café owner (Jude Law) — all while in search of something to mend her broken heart. Waitressing her way through the country, Elizabeth befriends others whose yearnings are greater than hers, including a troubled cop (David Strathairn) and his estranged wife (Rachel Weisz) and a down-on-her luck gambler (Natalie Portman) with a score to settle. Through these individuals, Elizabeth witnesses the true depths of loneliness and emptiness, and begins to understand that her own journey is part of a greater exploration within herself. Sometimes the tangible distance between two persons can be quite small but the emotional one can be miles.
MY BLUEBERRY NIGHTS is a look at those distances, from various angles. I wanted to explore these expanses, both figuratively and literally, and the lengths it takes to overcome them.

Jacky Pang Yee Wah began her career in commercials. A founding member of Jet Tone Films, she has worked on Wong Kar Wai’s films for many years – including CHUNGKING EXPRESS (associate producer), IN THE MOOD FOR LOVE (co-producer) and EROS (producer). A prolific
producer, she has produced several films under the Jet Tone banner, including Jeffrey Lau’s A CHINESE ODYSSEY 2002, Joe Ma’s SOUND OF COLORS and the upcoming Taiwanese production MIAO MIAO.

William Chang Suk Ping has been responsible for redefining the aesthetic scope and ambition of Hong Kong cinema in the past 15 years. His work
on IN THE MOOD FOR LOVE and 2046 has also won international acclaim. One of the most sought-after production designers in Asia’s film and music industries, he has also established himself as a leading film editor beginning with Wong Kar Wai’s ASHES OF TIME and all Wong’s subsequent films. He has worked with a range of talents from Stanley Kwan to Tsui Hark and is probably best known for his daring and innovative work with Wong Kar Wai. The Lady from Shanghai
Previous