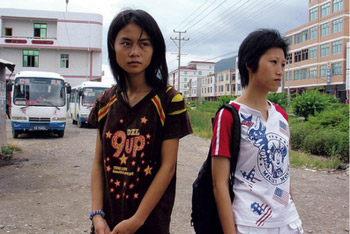 An agricultural villege of the Fujian in Southern China, Xiu Xiu’s grandmother is diagnosed with cancer. Xiu Xiu and her sister, Ah Qiong have started moving together to make their grandmother to meet up with their parent in jail for the one last time. They are both sentensed for kidnapping.
During the train ride home, Xiu Xiu can no longer contain the suspicions she has been harboring for so many years. As her adopted mother sits quietly in shackles, Xiu Xiu peppers her with questions: Why has her adoptive family always insisted that she was not abducted? When her adopted mother found Xiu Xiu playing alone in a market, what made her so certain that the child was unwanted? What made her think Xiu Xiu’s birth parents had abandoned
While adoptive mother and daughter battle over whose memories are more reliable, back in the village, Xiu Xiu’s grandmother grows steadily weaker. Will the two women arrive home in time to see her before she passes away?

“Taken as a metaphor, cancer is less a pathology of time than it is a pathology or a symptom of space.”
– Susan Sontag, “Illness as a Metaphor” If we take film as an artistic medium of space and time, I think it only fitting to borrow the above quotation to express the significance of this film.
The Chinese title of the film, which translates roughly as “An Extraordinary Family Matter”, carries a dual connotation. The first implies an ordinary family trying to cope with an extraordinary set of circumstances. The second implies that the family itself is, by its very nature, extraordinary or unusual.
The film depicts a rural household that is rapidly disintegrating due to a two-decades-old kidnapping, a tragedy born of conflicted human nature.
Over the last twenty years, China’s overpopulation problem has left the government with no choice but to implement a stringent system of family planning that restricts most families to one child. But the traditional male-dominated value system that prevails in the countryside, where over 800 million Chinese still reside, has led many rural families to abandon, give away or sell their daughters in the hope of having a son. This phenomenon, and the commensurate increase in the abduction and sale of so-called “superfluous children”, is rapidly becoming a societal problem that is impossible to ignore. Yet passing a value judgment on those involved is no simple matter. For people such as Xiu Xiu’s adoptive mother, accused of kidnapping, the lines between good and evil have become blurred. They live in an age of moral ambiguity, an ambiguity that seems to have become a defining feature of modern China.
Depicting a real life tragedy through the medium of film is always an enormously difficult undertaking. We were able to secure the cooperation of the two sisters because they felt that the making of this film might facilitate the early parole or release of their mother, and thus resuscitate an ailing family. From the beginning, it was clear to all of us – the two sisters and the entire film crew – that the disease afflicting this family was symptomatic of a larger societal illness. Yet despite our best efforts, none of us were able to substantially alter the family’s fate. The eighteen-month filming process was a constant struggle to help the family find a way out of its predicament, but it was also a process in which we were sometimes forced to stand by and watch helplessly as events unfolded beyond our control. What we never expected was that the metaphorical disease afflicting the family would take on a more concrete form: in the midst of filming, we learned that the grandmother had been diagnosed with late-stage cancer, and that it was spreading rapidly. We quickly altered the script and shifted our focus from the conflict between the two sisters to an attempt to secure the mother’s release from prison so that she could visit her mother-in-law one last time.
The relationships between the people in this film and the spaces in which they exist are, in a sense, a reworking and a re-synthesis of real life. Yet running through each disparate moment in time, each distinct event, we can see a natural flow, a larger narrative thread. From this standpoint, the film can be viewed either as a documentary film or as “a narrative film starring real people, appearing as themselves.”
Faced with the dualities of life and death, reality and fiction, right and wrong, love and hate, the boundaries begin to blur, and soon disappear on the anterior shore of the silver screen.
Perhaps each human existence is an unconscious reflection of an age, and history but a forced march through various shades of death. Assuming that tragedy is a vicious cycle of the world we live in, this film is not a record of the tragedy but an attempt, however feeble, to delay the tragedy from coming full circle.