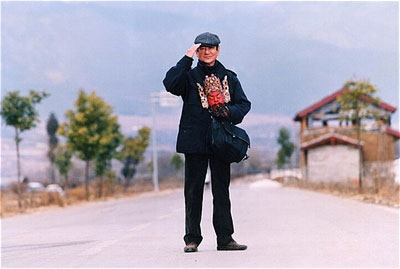 Riding Alone for Thousands of Miles is a 2005 Chinese / Japanese drama film directed by Zhang Yimou and starring Ken Takakura. It premiered at the Tokyo International Film Festival on 22 October 2005 and was released in China on December 22, 2005. Written by Zou Jingzhi, the film tells the story of Gouichi Takata (Takakura), an aged Japanese father who, ever since his wife died, has not been in good terms with his son. When he learns that his son is diagnosed with liver cancer, he decides to travel to the Yunnan province in China in his son’s place to film Riding Alone for Thousands of Miles, a traditional item in the local nuo opera (??), in which his son is a leading scholar. He hopes that by doing so, he might finally gain the forgiveness of his son.

The title of the film is an allusion to the fabled story of Guan Yu’s perilous solo journey to reunite with his sworn brother and lord Liu Bei, as told in the Romance of the Three Kingdoms. It is a story about brotherly love and loyalty much told in Chinese folklore and operas. The film draws the parallel between the folk tale and Takata’s quest to fulfill his son’s wish. Gouichi Takata (played by Ken Takakura) is an aged Japanese father who has not been in good terms with his son Kenichi (Kiichi Nakai) ever since his wife died many years ago. When he learns that his son has been hospitalised, Gouichi travels to Tokyo but Kenichi, still angry that his father left him for a remote fishing town in Japan’s northern Akita province to escape the reality of his mother’s death, refuses to see Gouichi. Kenichi’s wife Rie (Shinobu Terajima) then gives her father-in-law a video tape made by Kenichi so that Gouichi may learn more about his son. The tape contains a footage of Li Jiamin, a Nuo Opera artiste from a village in Yunnan province of China. In the recording, Li promised Kenichi to perform Riding Alone for Thousands of Miles for him if he returns the next year. Gouichi then decides to go to China in his sick son’s place to film Li’s performance.

Gouichi arrives in Li Village (???), near the city of Lijiang, only to learn that Li has been imprisoned for assaulting someone who insulted his illegitimate son. His translator Jiang Wen (also known as Jasmine in the translated script) and the local guide Qiu Lin (known as Lingo in the translated script) suggest that he films someone else, but Gouichi insists on Li. After much trouble attaining clearances from the authorities, Gouichi gains entry to the prison facility. However, Li breaks down in tears on stage and is unable to perform as he misses his son badly. Gouichi decides to travel to Stone Village (???) to fetch Li’s eight-year-old son, Yang Yang (Yang Zhenbo). While in the village, Gouichi receives a call from Rie, who tells him that Kenichi has been diagnosed with liver cancer.

On the way back from Stone Village, the vehicle breaks down. Yang Yang takes the chance to run away as he does not want to meet a father he has never seen. As Gouichi chases after the boy, both become lost in the limestone hills. They have no choice but to spend the night in a cave awaiting rescue. Yang Yang, initially hostile towards Gouichi, gradually warms up to him. The next morning, they are found by a combined effort of villagers and the police. Gouichi feels that Yang Yang’s opinion should be respected and decides not to force him to meet with his father. At this time, Gouichi receives another call from Rie, who informs him that Kenichi has died, leaving behind a letter announcing the long-awaited forgiveness.

Gouichi returns to the prison with many photographs of Yang Yang. The much moved Li promises to put up his best performance. Supported by a band of musicians and co-performers, all inmates of the prison as well, Li puts up Riding Alone for Thousands of Miles. With his own solo journey in a foreign country to seek forgiveness from his son finally concluded, Gouichi returns to his fishing town.