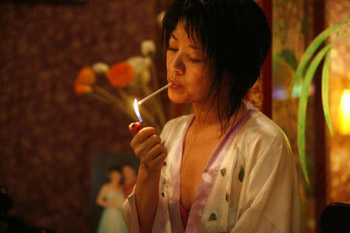 Every year, China’s turbulent economic expansion tempts thousands of im poverished peasants to the prosperous region surrounding the capital of Beijing. The promise of higher wages and an attractive modern lifestyle prompts many a migrant to burn their bridges. One of the two million people who have recently moved to the area is pretty Liu Ping Guo and her husband An Kun. Having both found a job, they now earn enough to lead a modest life, even managing to save a little. Liu Ping Guo works as a masseuse at Gold Basin Foot Massage Palace owned by Lin Dong and his wife. Their childless employers are desperate to have a baby. Liu Ping Guo’s boss, Lin Dong, shows her all the right moves to please her upwardly mobile clients and get better tips. During a party with her colleagues, Liu Ping Guo drinks too much. Taking advantage of her drun ken state, Lin Dong rapes her. An Kun, who works as a window cleaner, observes the assault. His jealousy and rage soon dissipates when he hits on the idea of blackmailing the rapist. As long as Lin Dong pays him and lets him sleep with Lin Dong’s wife, he promises to remain silent. When Liu Ping Guo falls pregnant, her husband suspects Lin Dong to be the father. His attempt to squeeze more money out of his wife’s employer ends in a fateful deal by which An Kun will get the money he demands and Lin Dong will get the child. Their wives are not consulted. Shortly after the birth, Liu Ping Guo starts working in Lin Dong’s household as a nanny for the child she has had to give up. Before long, the situation escalates dramatically.