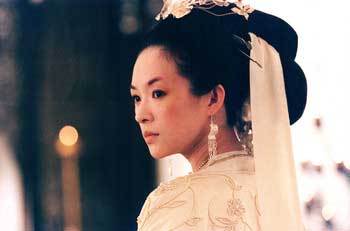 Sinossi Synopsis
Empress Wan can launch a thousand ships with her charm and fight a hundred soldiers with her sword. But something is lacking in her life and she harbours forbidden desires for her stepson Prince Wu Luan , an introverted young man, who shies away from the palace to indulge in the ancient art of music and dance. When the Emperor dies all of a sudden and his younger brother Li takes over the throne, Wan shocks everyone by agreeing to marry Li. But Li is no fool, oblivious to Wan, he has dispatched his guards to kill his nephew. After warding off the assassination attempt in a ferocious fight scene, Wu Luan determines to return to the palace and revenge himself by killing his uncle. No sooner has Wu Luan returned to the palace than he finds himself trapped in a double love triangle: on the one hand, there is Wan, on the other, Qing Nu, the daughter of the conniving Grand Marshall. When Emperor Li proclaims that a big banquet will be held for his ministers, Wu Luan realizes it is the time to strike.

Commento del regista Director’s notes
Gazing back upon our journey with Ye yan (The Banquet),I can say I am satisfied with our opus in at least these four respects: focus, dialogue, acting and spirit.
Ye yan has dodged the peril of spreading the audience’s attention over countless details. Instead, the film’s intricate combination of cinematic elements (whether they be performance, costume design, lighting or action) has concentrated the focus on the development of the plot and the powerful shifts in the characters’ emotions and relationships.
One of the challenges we faced in the beginning of our voyage was the dialogue. The film takes place in the Tang dynasty. How were we to translate this ancient setting into an elegant yet sufficiently modern language? Would the sentences be long or short? Sheng Heyu decided to write the script in short, sharp sentences that concentrate the strength of their meaning and let no word go to waste.
Zhang Ziyi’s character, the Empress Wan, is the fulcrum of the film’s drama. Her emotional surges and calculated blows provoke the movement, friction and outbursts of the plot. The performance of the Empress required a deep understanding of human relationships and a constant adaptation to her emotional environment. Despite her young age, Zhang Ziyi rose to the challenge and provided an awe-inspiring interpretation.
I believe Ye yan has illuminated an unknown face of classical China. It shies away from recent Chinese films and their tendency towards excessive colours and baroque set-design. I hope these 10 months of work provide a vision of a strong and luxurious, yet simple and true antiquity; an antiquity where loneliness is noble and failure is human. Biografia Biography
Born in 1958, Feng Xiaogang developed a passion for painting and literature from early on in his youth. After graduating from high school, he entered the Beijing Cultural Military group and designed its dance performance. Starting in 1985, he taught art design at the Beijing Television Art Center. He took his first writing steps by collaborating on Unexpected Passion with Zhen Xiaolong. Directed by Xia Gang, the film won the Golden Rooster Award for Best Script along with four other awards. 1994 marked his breakthrough in direction with Gone Forever with my Love (1994) while in 1997 he directed his first feature film The Dream Factory (1997), an immediate box-office hit. His most recent works, Big Shot’s Funeral (2001), Cell Phone (2003) and A World Without Thieves (2004), have broke Chinese box-office records, making him the No. 1 grossing director in the country.

If You Are the One di Feng Xiaogang