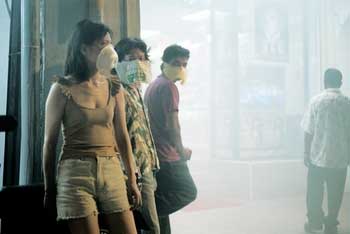 After being robbed and attacked in Kuala Lumpur, Hsiao-kang, a homeless man, is taken in by some Bangladeshi workers. Sinossi Synopsis
One of them, Rawang, lets him sleep beside him on an old mattress he had found. As he nurses Hsiao-kang’s body, he feels calm and contented. Is it because of the mattress or Hsiao-kang? Chyi, a coffee shop maid is also nursing someone’s body – her lady boss’s paralysed son. Chyi dreads her life. When she meets Hsiao-kang later, her body fills with lustful desire. However, she realises how little freedom she has when she can’t find a place to have sex with him. As Hsiao-kang slowly recovers, he finds himself caught between Rawang and Chyi, pleading for attention like a stray cat but also always ready to fly away like a moth. Chyi’s lady boss also lusts after Hsiao-kang’s youthful body, realising that he resembles her paralysed son.
Meanwhile, a heavy haze invades the city that is so humid that it stinks of the perspiration of its multi-ethnic people. These men and women and the old mattress lose their way in the haze but find one another…

Commento del regista Director’s notes
This is the first time I’m making a film in my homeland, Malaysia. We discovered a special location next to the Pudu Jail in Kuala Lumpur. It is a large abandoned building. In the early 90s, as part of its economic development plan, the Malaysian government brought in large numbers of foreign workers to work on its many construction projects. One of these was the twin towers, then the tallest building in the world. By the late 90s, many of these projects were abandoned due to the Asian economic crisis. These workers became unemployed overnight and many went into hiding, becoming illegal laborers. This building is a remnant of those days. As we entered, we were surprised at how grand it looked on the inside. It felt almost like a Post-modern opera theatre. In the middle of it, we found a deep pool of dark water (probably accumulated from rain and floods). I was reminded of Mozart’s The Magic Flute. The prince, princess, spirits and monsters can make this concrete jungle their new stage. I was also reminded of a poem by the Chinese poet Bei Dao:
Let us go,
For we have not forgotten.
Let us seek the lake of life.
Before I began filming, I met a young fortune teller. He recognized me but didn’t know what film I was going to make. He told me that there will be a pool of dark water in my new film and that when I find the pool, my film will be completed

Biografia Biography
Tsai Ming-liang was born in Malaysia on October 27th 1957. He graduated from the Chinese Cultural University of Taiwan and has written and directed for stage and television. His films have won many awards including the1994 Golden Lion (Aiqing Wansui, 1994), the Silver Bear for Tian Bian Yi Duo Yuan (2004) and five FIPRESCI awards.
In 2002, he received the distinguished medal of the Knight of Order of Arts and Letters from the French government. His next film will be produced by and shot at the Louvre Museum in France.

I Love You di ZHANG Yuan