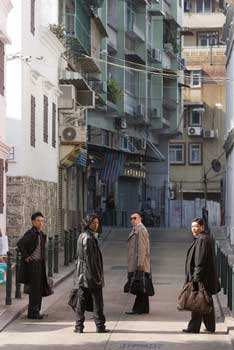 Il cinema di Johnny To in concorso a Venezia Sinossi Synopsis
The time is 1998. The setting is Macau. Every living soul jumps at every chance to make quick money before the Portuguese colony ushers in a new era under the Chinese rule. For the jaded hit men, they wonder where this journey will end. Against this background of fin-de-siècle malaise come two hit men from Hong Kong sent to take out a renegade member trying to turn over a new leaf with his wife and newborn baby. They soon find themselves in the throes of a dilemma when two of their former associates also show up, intent on thwarting them at every cost.

Commento del regista Director’s notes
In times of change when rules no longer apply, the only thing that matters to an individual’s survival is the decision he makes.
Exiled follows a group of wanderers who’ve been on the road for years but never quite figured out where the end lies. At a midway town, they’re confronted with a critical dilemma and decision has to be made: do they do what they’re told or take a stand for what they believe in? Their decision will turn them against everything they know. But at the end, the only thing that matters is what their hearts say.
The state of exile does not have to be involuntary expulsion. It is an action of voluntary absence in search of a higher ideal. This is perhaps a romantic sentiment when set against today’s cynical world. Nevertheless, it is what makes us human.

Biografia Biography
Johnnie To was born on April 22nd, 1955 in Hong Kong. With a film career spanning over 25 years, he is one of Hong Kong’s leading directors today. Having reached commercial success in the 80’s, To turned to more personal works in the mid-90s following the creation of his film production company Milkyway Image (HK) Ltd. In recent years To’s stylish film aesthetic caught on in the west following film festival appearance of his works including “The Mission” and “Fulltime Killer”. To’s “Breaking News” premiered at 2004 Cannes International Film Festival’s Official Selection program. “Throw Down” was subsequently invited to Venice International Film Festival in the same year. “Election” was in Competition in Cannes in 2005 and went on to receive 11 nominations at the Taipei Golden Horse Award. The film won Best Picture and Best Director Awards at the 2006 Hong Kong Film Awards.