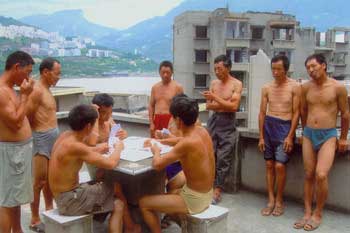 Sinossi Synopsis
Fengjie, China, 2005. Painter Liu Xiaodong visits the Three Gorges area to create his oil painting series “Warm Bed”. Twelve local deconstruction workers become models for his live sketches. Fengjie, with its two thousand years of history, will be dissipating very soon. After the completion of the Three Gorges Project, the whole city will be submerged under the water. During his stay with the models, the painter is gradually conquered by that reality. Bangkok, Thailand, 2006.
“Warm Bed”, again. Liu Xiaodong invites twelve tropical women as the models on his next painting. The burning hot city lets the women be drowsy. Only the fruit on the floor keeps its freshness. As the painter finds himself exhausted, the women cheer each other and sing a lively song together..
Both cities have their own river running across their own core, galloping forward, never returning.

Commento del regista Director’s notes
I took my camera to follow painter Liu Xiaodong, I traveled from the crumbling city of Fengjie to the tropical city of Bangkok. In front of me are two local groups of men and women from the two cities respectively. The two cities are far away from each other, however, I find that the human condition is surprisingly similar. During my unintentional filming, I saw Asia’s state of mind. Biografia Biography
Jia Zhangke was born May 29th,1970, in Fengyang, Shanxi Province of China. He graduated from the Beijing Film Academy and made his debut feature film Pickpocket in 1998. He is actively involved in independent filmmaking in China; the usual Shanxi set of his films signals how deeply his rural upbringing has influenced his aesthetic. His pictures Platform (2000) and The World (2004) has both been selected in official competition at the Venice International Film Festival.