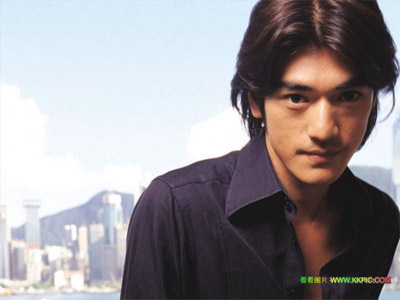 Takeshi Kaneshiro is a male actor and model.

With a half Japanese father and a Taiwanese mother, Kaneshiro was born and raised in Taipei, Taiwan. He has two brothers. After being bullied at a regular Taiwanese high school, the Gaoxong Preparatory School, over his mixed heritage, he enrolled at English-based Taipei American School, which enabled him to converse in English, making him effectively trilingual considering his fluency in Mandarin and Japanese.
(From Wikipedia, the free encyclopedia)

“He got discovered at 15 years old. There was a motor bike that he really wanted so he signed on to make a TV commercial for the money. Apparently one of his classmates’ mother was a talent scout and had always tried to sign him. Thanks to the bike, he got into the biz ever since.” (from the Takeshi Kaneshiro fan site).