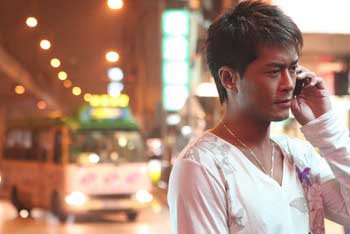 Sinossi Synopsis
For ne’er-do-well compulsive gambler Thongs, there’s only one thing more fearsome than debtors at his doorstep – having to coax a crying baby. But what if the baby becomes his golden goose to fend off his debtors? Brought up in an impoverished family, and kicked out of school in his teens, Thongs found himself on the wrong side of the tracks despite being nimble-footed and neat-fingered. Spurned by his family and hounded by debtors, he is goaded by his greedy landlord to collaborate in harebrained heists. Together with the agile and opportunistic Octopus, the trio kidnaps the baby grandson of a tycoon. However, due to some unexpected glitches, they fail to hand him over to the triad as planned.
With the assistance of an angelic nurse Melody, the landlord’s baby-crazy wife and Octopus’ teenage fan Yan, the macho men discover the joys of Rob-B-Hood. When they realize that the triad is after both the ransom and the baby’s life, they decide to make their hostage their protege.

Commento del regista Director’s notes
After New Police Story, Jackie and I spent several months kicking around new ideas for our next project. Even though making another action film was our priority, Jackie made a special request – he didn’t want to play another cop. He didn’t want to repeat himself, he wanted a twist. Driven by this new challenge, we worked very hard to come up with something different but drew a blank until late one night in the workshop, Jackie, script writer Alan Yuen and I came up with something rather daring – Jackie Chan the hero will become Jackie Chan the thief. This character is not just any ordinary thief, but a 3-in-1 thug, liar and compulsive gambler. A thief who’s willing to steal anything for money, except for this particular assignment, he’s not stealing rare gems or anything valuable but a Baby!
We designed the “Thieving Musketeers” and gave Jackie two partners in crime – Michael Hui and Louis Koo. With three renowned comic actors on board, we were quite confident that the chemistry between this trio would send sparks bursting through the screen. The next step was casting the Baby. After over 100 auditions, we finally found Matthew. Unfortunately, it also marked the beginning of the darkest days of my film career.
Baby Matthew cannot work more than 8 hours a day, and he takes two or three naps during that 8-hour period. No one on the set is allowed to make any noise, so everyone had to communicate with sign language, a bit like those old silent films. Babies are tough to shoot because they never do what you want them to. No matter who you are, no one can command a baby to act. Losing your temper is definitely not the way to go about it. The only way to do it is with time, patience and money to guide him in each shot.