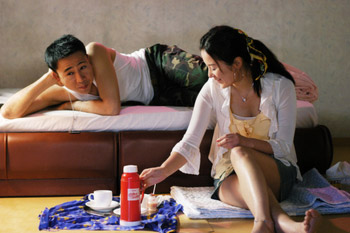 Biography and filmography of the director-

Private Kim and sergeant Lee go out for off-duty time at saturday afternoon.
After night party, they stay at a motel to sleep.
Sergeant Lee gives to private Kim a direct order that private Kim have to take a shower while he has a sex with that prostitute.

Jong yoon Lee was born in 1971, and graduated in Film at ChoongAng University.

He was an assistant director in feature?Nightmare?(2000), ?Who are you?(2002). ?A day out?was presented by Korean Film Council and awarded Special Prize at Seoul Independent Film Festival in 2005. And also screened at Vancouver International Film Festival, Tokyo Image Forum.

Driving With My Wife’s Lover