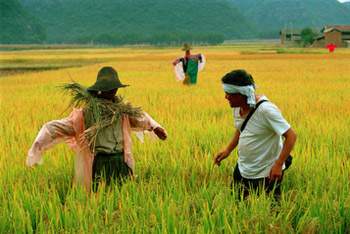 From an interview with writer-director Zhang Yang The most surprising thing about this project is that it’s inspired by a true story … what happened in reality?

I came across it as a news item some three years ago. The real story was much simpler than mine. The man who tried to carry the corpse back to its home village was found by the police very early on, and they forced him to cremate the body and carry back the ashes instead. The case provoked lots of comment at the time. There were broadly two opinions. One camp thought the whole thing was outrageous: aside from the obvious illegality, it was distasteful and risked spreading disease. But the second, larger camp found the story very touching: they thought it represented values like fidelity and loyalty which are hard to find these days. I went to interview the man who carried his friend’s corpse. He turned out to be a very uncomplicated guy. He’d had no hidden motive, he just wanted to honor a promise he’d made to the dead man.

What made you decide there was a film in the story?

Three things, really. The first was the story itself. It’s obviously unusual, and it matched my taste for irony and black humor. The second was the man’s personality. I looked forward to exploring that kind of indomitability, that sense that he’d go on until he got there, no matter what. And the third was that it would be a road movie.
I’ve wanted to make a road movie for as long as I can remember, and this story offered me the chance to come up with an original take on the genre. Most of the road movies I’ve seen are American, and they tend to feature car chases and such. I wanted to do something more Chinese.

In effect, you’ve constructed a spot-sample of behavior and attitudes at a certain social level in contemporary China.

That’s exactly what I hoped to do. The main character is a migrant worker, on the lowest rung of the social ladder, and the people he meets on the road are all workingclass or sub-working-class types too. I wanted to use his journey as a way of showing relationships and attitudes in this ‘underclass’. I do want to show something of a social panorama, but the key thing is to show what’s in the characters’ hearts, good or bad.

How did you go about creating all the characters he meets on the way?

The challenge wasn’t in picking the characters. China’s reality offers a limited range of types at this social level, so the choice was circumscribed. The real challenge was to define what each of them would bring to the story: their back-stories, how they would interact with Zhao, how they’re relevant to the film’s larger themes. While we were writing it, I deliberately didn’t focus on the incidents as such. I wanted to focus more on their individual psychologies, to explore what’s positive about them and what’s negative. Approaching the characters that way allows you to leave them and move on, because none of them is individually crucial to the story development.

You have many famous faces in your cast…

Only one actor was locked in place when we started: Zhao Benshan in the lead. The character ‘Zhao’ has the archetypal mentality of a Chinese peasant — that “keep on keeping on” spirit — and Zhao Benshan’s real-life background exemplifies that exact spirit. You could say he fits the role like a glove. Also, he’s known for stage comedy, which makes a good fit with the tone of our film.
There were three main reasons I went for guest stars in many of the other roles. First, it’s fun for the audience to discover well-known faces in cameo roles. Second, the cameo roles aren’t on-screen for very long, and so I needed actors who could nail those characters fast. And third, I wanted the audience to remember these characters, and using big names was a way of helping them to do that.

Where did you shoot it?

The beginning and ending were shot exactly where the story says they are: the first scene was shot in Shenzhen, and the last in the Three Gorges area, near Chongqing. For practical reasons we shot everything else in different parts of Yunnan, in China’s deep south-west. The story’s journey covers a lot of ground across the southern part of China, and we had to find locations that would match the various sights you’d expect to find on that journey. Fields of flowers, as in Sichuan, Corn fields, as in Guizhou. Banana trees, as in Gansu. We found everything we needed in Yunnan, although it took quite a long time to find locations that would give that generic impression of the south.

What are the resonances for you of ending the story in the Three Gorges area?

That’s very important. The film’s Chinese title Luo Ye Gui Gen means literally “Falling Leaves Return to their Roots”. It’s a well-known saying, and it expresses the film’s theme very concisely. In the Three Gorges area on the Yangtze River, countless communities and individuals have been uprooted and resettled elsewhere — because their ancestral homes are about to disappear under man-made lakes. In other words, roots can be displaced, but then grow again somewhere else. There’s also a larger social implication. Modernisation displaces tradition, just as a dam may displacen people who have lived in the same place for countless generations. That’s one of the key stories of contemporary China in a nutshell.

— from an interview by Tony Rayns (Beijing, 9 January 2007),
translated by Peter Loehr