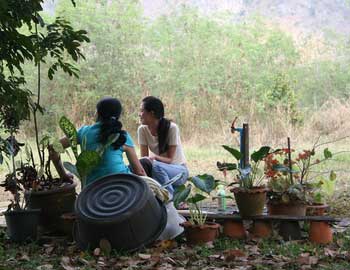 At a small town hospital, Mr. Toa spends his morning trying to court Dr. Tei. He is painfully shy, but tries very hard to declare his love.

Sang Sattawat
Syndromes and a Century Commento del regista Director’s notes
When I was a child, I lived in hospital environments for twelve years. My parents were doctors who raised us kids in a house provided by the small-town hospital where they worked. My mother often brought me to her office, a dimly lit room overlooking a children’s ward. This room was my playground, my station to look at people. Nearby was a pond where patients and relatives fed the fish. From the room’s window, you could see people having lunch and sleeping in the corridor, out of the sun. In retrospect, everything seemed to move in slow motion.
Recently I went back to the hospital and found myself lost. Everything had changed and the familiar spaces were gone. As a film-maker, I have been fascinated by the spaces of a small town and its landscape. But I had never really looked at the place where my family lived. Now, with my hometown changing rapidly and becoming more like Bangkok, my memories of the lost spaces seem even more distant. With the waves of globalization affecting the way we live and how we make films, my desire to make a real personal recollection has become more intense.
Sang Sattawat (Syndromes and a Century) is a contribution to the New Crowned Hope festival, a project that will explore how we remember, how our sense of happiness can be triggered by seemingly insignificant things. It is an experiment in recreation of my parents’ lives before I was born, which also includes the lives of those who have touched me in the present day. It will be an interpretation of distant lives and of architectures that I remain fond of, along with contemporary ones that I have around me.

Biografia Biography
Born in 1970 in Bangkok, he grew up in Khon Kaen in north-eastern Thailand. He has a degree in Architecture from Khon Kaen University and a Master of Fine Arts in Filmmaking from The School of the Arts Institute of Chicago. Since he began making films and videos in the early 90s, he has become one of the few film-makers in Thailand who have worked outside the strict Thai studio system. He is also active in promoting experimental and independent films and is currently acting as producer on an experimental feature. He has earned growing international recognition through both his film-making and art projects. He has exhibited his art projects widely internationally, has made a large number of short films and four feature films. With three films of very original vision, Weerasethakul has become one of the major international young film-makers to watch and a key figure in the emerging Thai cinema. Tropical Malady, his last feature, won the jury prize in Cannes in 2004.