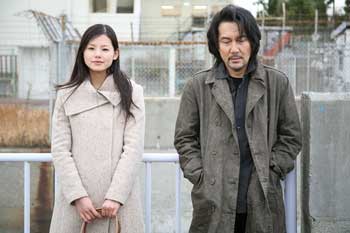 In his search for a serial killer who drowns his victims in seawater, Detective Yoshioka is haunted by the image of a murdered woman in a red dress. Sinossi Synopsis
In his search for a serial killer who drowns his victims in seawater, Detective Yoshioka is haunted by the image of a murdered woman in a red dress. His fellow detective is suspicious that Yoshioka is the serial killer, and Yoshioka himself becomes terrified that he might be the very killer that he is trying to find. Is his memory twisted? In the old harbor, grudges held by the dead explode into present life, and reality starts to shake and shriek; but the voice of truth is never wrong and responsibility must ultimately be accepted for the past. Forgiveness has its price, but nothing can ever go back to square one.

Commento del regista Director’s notes
For a long time I have been thinking about this problem of why a ghost is scary. They are not fictional creatures but human beings that obviously used to live. More over, they do not necessarily have the intention of coming after and killing us. So why are they terrifying? I have come to the conclusion that the core scariness of ghosts may be that while we are living in the present time, we have to be dragged back into the past. And I started to think of making a film based on that idea.
The past is what we are most afraid to face… that is what a ghost is. We try to fend off this fear by forgetting and moving on to the future, by making that past not exist. However, what if the past still wouldn’t go away? What if it comes screaming harshly every night to open your tight-closed ears? This has become a story of human and ghost interaction and the strange struggle between the present and the past.
This is definitely a “ghost story” genre, but at the same time it is also a film about “retribution.” Biografia Biography
Kiyoshi Kurosawa, was born in 1955 in Kobe, Hyogo Prefecture, Japan. He started directing 8mm films while studying Sociology at Rikkyo University. Shigarami Gakuen screened at the 1980 PIA Film Festival. Kurosawa spent the next few years learning from directors Kazuhiko Hasegawa and Shinji Somai. In 1983, he made his commercial feature debut with Kandagawa Wars. In 1992 Kurosawa took his Charisma screenplay to the Sundance Institute Screenwriter’s Lab. Cure debuted at the 1997 Tokyo International Film Festival achieving international recognition and later winning the Best Director prize for Kurosawa at the Yokohama Film Festival. In 1999 License to Live screened in the Berlin Film Festival and Charisma was highly acclaimed at the Directors Fortnight in Cannes. Barren Illusion screened in Venice in 1999. In 2001 Pulse screened in the Cannes Film Festival Un Certain Regard and at Sitges winning the Critics prize at both Festivals.
Kurosawa returned to Cannes in 2003 with Bright Future in Main Competition. Doppelganger was selected as the opening film for the 2003 Pusan International Film Festival. In 2005 he directed a short film Bug’s House based on the story by a popular comic book author.