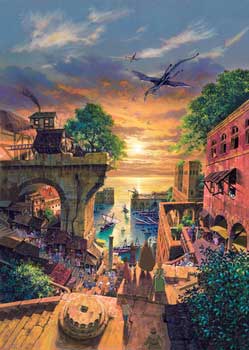 Suddenly, the dragons that kept to the westward end of Earthsea appear before the men of Archipelago. Sinossi Synopsis
Suddenly, the dragons that kept to the westward end of Earthsea appear before the men of Archipelago. Crops wither and livestock falls ill as if in response to the phenomenon. The world is beginning to lose its balance. The Archmage Ged departs on a journey in search of the source of evil and encounters Arren, the Prince who deserted his homeland of Enlad. The youth carries darkness within and is also being pursued by an unknown shadow.
The pair reaches Hort Town where men are sold for slaves, drug use is common and fake goods are sold. A lively place on the surface but its residents’ blank faces carry no signs of purpose. While wandering in the streets, Arren saves a young girl from the slave takers. But the mysterious girl, Therru, does not accept Arren.
A man by the name of Cob was once a great wizard defeated by the Archmage Ged. He who fears death above all is now behind the evil disturbances of Earthsea.

Commento del regista Director’s notes
Being an amateur-like first-time director, I am both surprised and embarrassed when I learned that Tales from Earthsea has been invited to the prestigious Venice Film Festival. On the other hand, I am extremely honored and excited at the prospects for screening in a country that I am deeply attracted to, and sharing this film with the Italian audience. Biografia Biography
Goro Miyazaki was born on January 21, 1967 in Tokyo. After graduating from Shinshu University’s School of Agriculture in Forest Science, he worked as a construction consultant, taking part in landscape planning/design of parks and urban forestry projects. From 1998, Goro Miyazaki undertook the overall design of Ghibli Museum, Mitaka, and acted as the Museum’s managing director from 2001 to June 2005. In 2004, he was awarded the Minister of Education’s Art Encouragement Prize for New Artists in the field of art promotion. Gedo senki is his directorial debut.