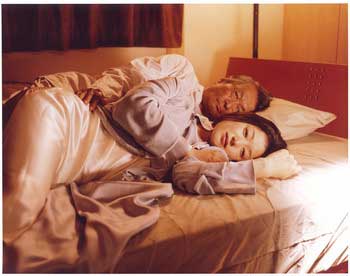 In a coastal cottage with a view of the setting sun, Kaoru, a wealthy woman who is gradually losing her youth, has retired from city life and lives a quiet life. Sinossi Synopsis
In a coastal cottage with a view of the setting sun, Kaoru, a wealthy woman who is gradually losing her youth, has retired from city life and lives a quiet life. She looks after an old, blind and dumb man as if he were an insect or a domestic animal, or a child. As he can do nothing for himself, she feeds him and takes him for walks. Kaoru has something of a superiority complex about her lifestyle – she believes that she has the perfect life, as she is free from restrictive common sense and the dignity of self-devotion. However, in truth this beautiful relationship merely offers Kaoru an escape from society, while affording her the comfort generated through the pair’s strong mutual dependence.
Kaoru depends on the relationship with this child-like and innocent man more strongly than he needs her. Sometimes he wanders about like a homeless person, as if he does not truly need Kaoru.
Kaoru is frightened and anxious as a result of the man’s true freedom and she tests him. What starts off as a game gradually leads to Kaoru finding herself trapped. The relationship between Kaoru and the man becomes unbalanced and she confines herself to looking after him. Struggling with her own situation, Kaoru abuses the man and starts to depend increasingly upon him.
The border between reality and illusion starts to blur. A young couple, Taichi Shimamoto and Eiko Kijima, appear and flirt with Kaoru. At the same time the man ages rapidly, his health deteriorates and he soon dies. Kaoru, now released from “the relationship”, appears to have gained her freedom but is she truly free? Commento del regista Director’s notes
“There is a beautiful woman who lives with a blind and dumb man and the title be Crickets”. The producer tossed me first such a log line when we started working on the story. I immediately caught the line with the imagination of “mimicry”. What if the man can see and talk, but acts as if he was blind and dumb and plays a game? I thought it could be a kind of romantic comedy and that the story should take place somewhere in the west where the sun sets. I think such settings ultimately add a flavor of decadence to the story. My participation at Venice Film Festival, therefore, would be to pay respect to a centenary of Mr. Luchino Visconti’s birth and to eternal sprit of Mr. Daniel Schmid.


Biografia Biography
Aoyama Shinji was born in Fukuoka on July 13, 1964. He started making independent films at university. After working as an assistant director and critic, he directed his first feature film Helpless in 1996. His film Eureka was screened at the Cannes Film Festival in 2000 and it was awarded a number of prizes around the world. In 2001, Desert Moon was selected in competition at the Cannes Film Festival and in 2005 Eli Eli lama sabathani? received the “Un Certain Regard” Award at the same festival.